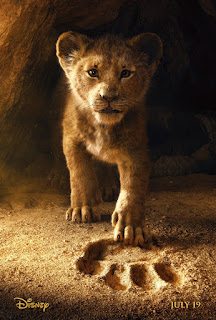 I saw The Lion King the other day. The story remained the same as what I remember from all the other versions I've enjoyed, but this time it was the animation that wowed me. This movie has the best animation I've seen in a long time. I am always amazed by what humans can create with technology. I actually got a little stressed when Scar went after Mufasa. Poor little Simba! It is still too scary for my three-year-old grandson, but older kids will love it. 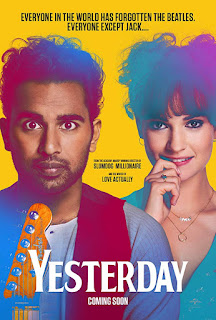 The second half of my movie-double-feature afternoon was Yesterday. This movie was very enjoyable; not because I was a "Beatlemaniac" as a girl, but because I realized again that the Beatles' music is timeless. I put The Beatles channel on SiriusXM to enjoy on the drive home from the theater.

The premise of this movie is that a school teacher played by Himesh Patel wants to be a rock star. His manager played by Lily James is a childhood friend (also a teacher) who has loved him all her life. He sees her as a sister. Who has not been there!

While frustrated by his latest flopped gig, he rides his bicycle home as lights all over the world go out for twelve seconds. The movie does not explain this phenomenon, but when the lights come back on, society has no memory of a few things: The Beatles, cigarettes, Coke and Harry Potter. These little twists that get discovered over the course of the movie are hilarious.

Ed Sheeran has a pretty significant role in this file, and makes the movie even more enjoyable. I highly recommend you see this little-known (as far as I can tell) film. I haven't seen a lot of advertising for it, and I was one of four in the theater. I loved it, and I think you will have fun reliving The Beatles' music, and the entertaining love story surrounding it.
Posted by Kathy Crowley-Gardner at 8:52 AM No comments:

Kathy Crowley-Gardner
I retired over a decade ago, and have spent my time exploring the next phase of my Life. I began by blogging and moved into traveling with my husband and writing a children's book series called Logie Bear & Friends Adventures available on Amazon.com.